How to Sleep in Airports 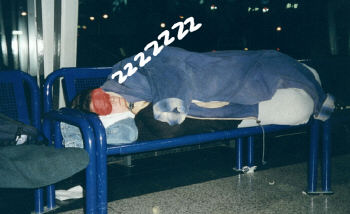 Sometimes, you simply can’t avoid spending a night in the airport. The penny-pinching college student may do so by choice, whereas others may be stuck there unexpectedly. Some locations openly encourage passengers to cat-nap, and others outright prohibit it. Some airports provide amenities that will make you want to stay, and others will leave you crawling out of your skin. In whatever airports your travels may land you, you may want to consider some of nocturnal know-how of people who have perfected the somewhat strange art of airport slumber.

First and foremost, it is important to remember that just because you’re flying out the next morning/day/night/whatever, you are not in any way entitled to sleep in the airport or to use it as your free hotel (unless you were stranded there by fault of the airline, in which case you should be granted access to their lounge or some other form of accommodation). Even though most of the time airport officials won’t actually kick you out (because they do realize that between layovers, delays, cancellations, and jet-lag, it’s inevitable that people will be snoozing), they may ask questions about your being there, and rightfully so. Some typical questions to expect (and have answers for!) are: 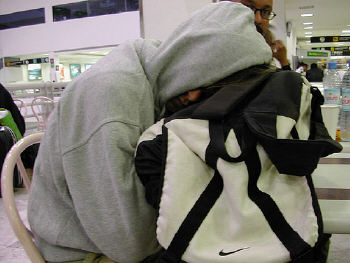 Also, keep in mind that airports can make mighty nice places to sleep for local homeless and transients, so try not to appear as such, and, when possible, camp out in your terminal instead of in areas that non-ticket holders can access.

Sensible Suggestions
As a European airport worker wrote to www.sleepinginairports.net, (we’ll get to more about this website later), “In general, if you behave properly, impose no security or safety threat (smoking where not allowed, etc), do not litter and are not a sour to the eye of companies with a commercial interest in airports, airport staff generally looks the other way.” This is the golden rule to follow when using an airport for overnight accommodations.

The second most important rule is this; always act innocent. Doesn’t matter if you’ve done this one time or a hundred, as far as anyone in charge knows, you really don’t want to be there, you really don’t have a choice, and you really didn’t choose to camp out on the floor intentionally. If you can manage, cry. As most women have learned, crying will get you out of practically anything. 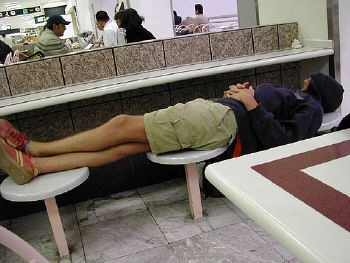 And last but not least, research the airport you’re planning on sleeping in! As mentioned earlier, www.sleepinginairports.net is the internet authority on airport dos, don’ts, and ratings. They have an extensive list of airports with rankings, reviews, and stories, so you’re as prepared as possible for your airport adventures.