Guide to Semester at Sea Pt 2: The Experience of A Lifetime 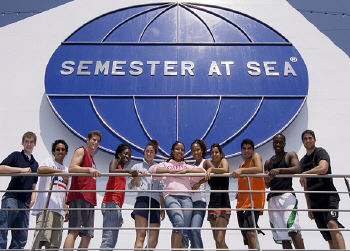 As I write this, it has almost been one year since my plane departed from Newark International Airport bound for the Bahamas. The Atlantis Resort provided a lush, tropical setting to start my journey around the world. I soon came to realize that countless Semester at Sea students meandered about the resort’s casinos and restaurants, basked in the hot Caribbean sun, and utilized the venues for nightlife. A sky high price tag accompanied any endeavor one decided to partake in at the Atlantis Resort, but the gorgeous surroundings helped to buffer the price. The morning of August 30th brought about the MV Explorers time of departure. Shuttles transporting luggage-ridden students bustled back and forth between the hotels and the port in Nassau. Instantaneously, the meet and greet began. Our luggage was taken to the ship while our boarding documents were reviewed, and after being granted permission to board, we made our way the ship.

Life on Board the Semester at Sea Ship 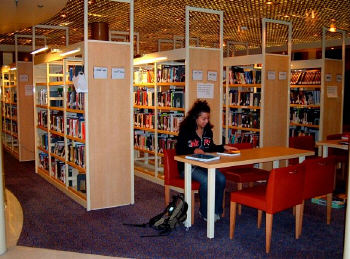 Our ship was our home for the four month voyage, and was comparable to a floating all-inclusive hotel. The cabins vary in size, the fourth deck having the largest student rooms, but all serve their primary purpose of sleep. Each cabin is shared by two people and comes with a small amount of storage space and a private bathroom, which is cleaned daily by the cabin’s perspective steward. Included in the rest of the interior space were classrooms, a computer lab, two dining halls, a student union, spa, salon, and cardio fitness center. Running on a treadmill while a ship is traversing swells makes for an interesting experience. Living spaces and working spaces tended to blur onboard, and at times, only being able to walk a few hundred feet in any direction started to make me feel a bit claustrophobic. Food served during the first few weeks of our voyage was basically enjoyable, but that soon changed. I do give the chef and crew a lot of credit for preparing three meals a day for an entire ship of people, but let me just say I am only starting to eat peanut butter again. Enticing names can only carry the food so far. After eating an indistinguishable white fish for four days in a row, taco day was an occasion to celebrate.

Outside the walls of the ship, sweeping views of the ocean tend to mesmerize you, along with the much needed clean, fresh air. Lounge chairs were spread out around the pool on the upper deck where a snack bar and weight room were also located. Sun bathing was a daily chore onboard and was usually accompanied by classroom reading material or mp3 players. I, along with the rest of the students, did attend classes in between ports. Coping with the disconnectedness was difficult at times. While surrounded by several hundred other people, some of whom you become very close to, there is still a lack of communication with the people at home. In order to deal with the isolation we would spend hours talking, no TV, no distractions, just speaking to each other. That has become one of my most fond memories. Reviewing and swapping pictures and e-mailing home about our adventures helped to pass downtime. The remaining onboard time was spent recuperating from the port we had just departed from or preparing for the next port. All of us were really there to experience the countries, after all. 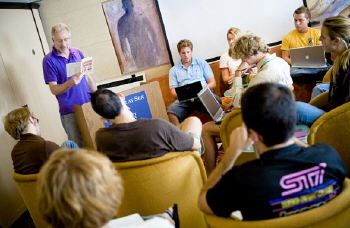 Shipboard life did have a few other perks attached to it. Between each of the ports, a lecturer, who was either a native of our next port or very well educated in our that area would team with an “inter-port” student to purpose a lecture ranging in topics from the basics of cultural life to the intricacies of foreign politics. The best advice that was offered by our guests dealt with how to best utilize our time in each country. My semester had the honor to be graced with Archbishop Desmond Tutu as our South African lecturer. Small groups of students were given an opportunity to listen to the Archbishop speak and were even granted time to ask him questions. There are few occasions when college students are able to flaunt their money more efficiently than during the auction on Semester at Sea. Items ranged from vacation homes, to language lessons, to signed books from Desmond Tutu. People were not afraid to spend excessive amounts of money that would be donated to the ship’s crew. Our experience on the ship was completed by pub nights, when students are allowed to drink on the ship, Sea Olympics, the Ambassador’s Ball, and many other events. 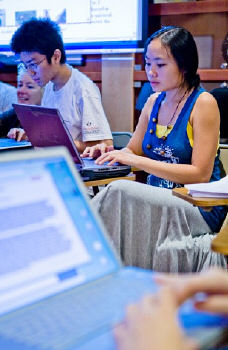 Time between ports varied from a mere day to week-long stretches across the oceans. The semester was split almost equally between time allotted for ports and for classes on the ship. Unfortunately, current world conditions do not always provide safe passage for a ship carrying nearly eight hundred primarily American college students. We were warned that changes in the itinerary could occur due to extenuating circumstances in a port. Days before our arrival in Kenya, Semester at Sea was dealt rather devastating news. Due to piracy off the East African coast our ship would have to be diverted from porting in Mombassa. It was disheartening to say the least, and we spent several days not knowing where our next destination would be. Before the ship was cleared at each location, a team of officials, usually from the U.S. Embassy or Consulate, would board and brief the entire community about the particular country’s economics, political atmosphere, and overall cultural life. Once the all clear designation was given to the ship, students and faculty swiped their I.D. card in order to leave the ship. Students were given the choice to either travel independently or to follow Semester at Sea designated excursions. Each option had its own pros and cons. Independent travel on Semester at Sea had two basic restrictions, first do not cross any international borders and second be on the ship by the designated time. Other than that, we were free to venture off as we pleased. SAS excursions provided a higher-class accommodation equipped with tour guides and usually extravagant meals. The main downfall of a SAS excursion is that you were at the mercy of the predetermined itinerary. Participating in both provided a nice balance between the freedom of independent travel and the ease of an ordered tour guide.

Transitioning Back
While I was abroad I missed speaking to my friends and family – and now I long for endless hours of dinner conversation, the anticipation of the next port, and the process of traveling with newly acquired friends. On board, my friends were only a staircase away, now we are spread out across the country. As a group we were changed by the experiences the semester provided. We were absent from communication and events for four months, even breaking news on Katrina was amiss to us. Each country that we traveled to provided us with a new set of cultural values to learn and a new place to familiarize ourselves with. Arriving back in the U.S. was both a welcomed break from extensive travel, but also a shocking realization that our time away had ended. I was welcomed back with tears and hugs which I eagerly returned, but I secretly wished my semester at sea had not ended. No one will ever have the same experience abroad as we did and I am glad. It would take the edge and excitement out of travel, why go if you already know exactly what will occur? Change and a sense of the unknown; that is the true allure of travel.

>> Read about how to apply & prepare for an SAS program in Guide to Semester at Sea Pt 1: Applying and Preparing