A Guide to Translation Devices for Travelers 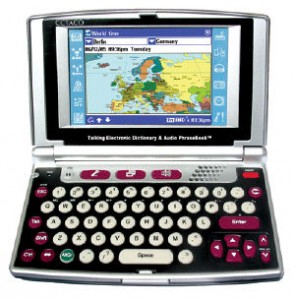 Sick of dragging lots of dictionaries around the world? Tired of memorizing the “common phrases” section of your guidebook but then find you don’t know how to actually say the words you so painstakingly tried to learn? Frustrated with learning how to ask a question or two only to realize you can’t understand the answers you get? Most travelers can identify with these situations, so it’s easy to see how an electronic translation device could come in handy while you’re on the road. The invention has come a long way in its 50-year lifespan and although they’re far from perfect, electronic translation devices can help you buy a train ticket, make a hotel reservation or simply say “sorry” to your seat-mate after the chicken bus takes that turn a little too quickly.

What are translation devices? What do they do?

Translation devices do just what the name says – it’s computer-assisted translation from one language to another so that you don’t have to learn even the basics in every language you’ll encounter around the world. The way these devices work varies, but generally speaking the user types in whatever word or phrase they want to translate into the machine or the program and then choose the language they want that word or phrase changed into. Some of these devices will then “pronounce” the word for you, while others just show you what the word is and leave you to figure out the pronunciation.

Keep in mind, however, that even the best translation devices aren’t perfect – they’re computers, not people, so instead of perfect translations these are usually going to offer you (at best) the gist of a sentence or phrase. You aren’t likely to get the exact meanings that are based on specific situations or on slang, syntax, and idioms.

Your options for translation devices is basically between devices that are dedicated translators or translation software which you can run on your laptop or PDA. There are advantages and disadvantages to both, but backpackers for whom space is at a premium tend to favor small devices that multi-task – in other words, if something like a PDA or smart phone that you’re already carrying can also function as a translator, that’s going to be more convenient than carrying around yet one more thing.

Should you bring a translation device on your trip?

While this is a highly personal decision that each traveler will have to make, there are pros and cons to consider.

Why You SHOULD Bring a Translation Device

Why You SHOULD NOT Bring a Translation Device

So, Boots crew, do I take a translation device on my trip?

BoostnAll Sez: Ix-nay the translation device – in other words, no. Sure, they can be convenient, and they can be useful for people who are going to be traveling through several different language regions, but we think these benefits don’t really outweigh the significant downsides for most backpackers. And remember that not all languages can be translated through these programs – or, at least, translated easily. If you really want to bring some kind of translator, chances are you’re a tech-nut who’s already bringing a PDA or laptop with you. In that case, add a translation program and you’re good to go.

Having said that, we know that not all travelers go the same way and that some of you aren’t going to leave home without a translation device. So, with that in mind, here are a few translation devices that we’d recommend: