What to Do if You Think You Have Malaria 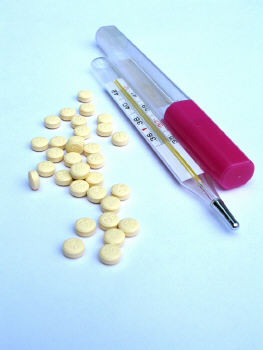 You have a fever, chills, you’re sweating, you’re exhausted, and maybe you’ve even got a headache and some muscular aches and pains…

Malaria can be decisively present even though you might not have all the textbook symptoms. To complicate matters it is often ambiguous to start with, and your prophylaxis might be hindering its full expression. Some other disease may be adding its symptoms to confuse you and worse, you may be confused by the disease. Any fever without a definite explanation is suspect until proved otherwise, as by a blood test. Self-diagnosis while you’re ill is not reliable.

If you have malaria, this is so serious that worries over side effects from long-term use of the malaria drugs become minor. You knock back the large dose of chloroquine, or the stand-by course of mefloquine, or whatever it is you’re using, and head for (or have yourself conveyed to) a hospital or local doctor, urgently.

The high dose of mefloquine might make you hallucinate or worse – but a malaria-induced fevered delerium definitely will, and it could also kill you. If that’s what you’ve got, then that’s what you must take, though if you had been taking mefloquine as prophylaxis, the high dose course ought to be some other drug. An anti-pyretic drug against the high fever can help, and it is not complex: use aspirin.

The worst situation is for a drug-resistant strain to make you delirious before you realise what has happened. This is where you will have to rely on the kindness of strangers. Make sure your travelling companions know your prophylaxis regime, and where you stash your drugs. Considering that everyone chatters about their particular scheme, and enquires after yours, this should not be difficult. In areas where this sort of thing happens, the local residents will have a good idea what to do, but probably won’t have drugs, especially the expensive drugs. Nor may the doctor or hospital, but they will have the knowledge to identify malaria, and will be able to shove your own drugs down your throat while mopping your fevered brow. Nobody need die from malaria, except by lack of good treatment.

I have not had malaria, and that suits me fine. I had a scare in Syria, where it is just possible to catch malaria. Fever, sweating, shivering, more fever: so I was away to the hospital. However, as I was still on my feet and didn’t scream when poked under the ribs, malaria was rejected in favour of “Grippe,” the all-purpose French term for a fever, probably of viral origin. I developed no other symptoms.

Few travellers catch malaria, and even if you spend a fair while in a bad area, your chances of avoiding malaria are good if you avoid being bitten. But anyone can be unlucky.

So go see your doctor, or a specialist travellers’ medical clinic.

And cover up your juicy flesh!

>> More about how to avoid malaria