Meet George Jetson: The History and Future of Space Tourism 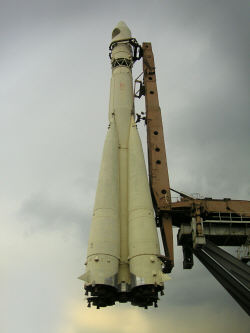 Space travel is technically defined as a voyage outside of Earth’s atmosphere. In the past, out-of-this-world excursions were limited to research purposes – despite ‘loose budget procedures’, no government will give someone 5 billion dollars for a joy ride in space. However, change the ‘b’ to a ‘m’ and you may have a few private-industry takers. Enter: space tourism.

With the aviation industry more than 100 years old, engineers, scientists and dreamers have looked beyond the horizons – and gravity – and into the stratosphere. In 1996, visionaries announced the creation of the X-Prize, a monetary reward intended to spur experimentation and the development of the space industry. To receive the prize – and its 10-million-dollar pot – a privately-funded piloted plane had to fly 100 kilometers above the earth twice within two weeks. Two passengers, or the equivalent weight, were also required to be on board.

Backed by Microsoft co-founder Paul Allen and designed by legendary aerospace craftsman Burt Rutan, SpaceShipOne entered orbit on October 4, 2004. Although the prize has been claimed, more than 20 groups are in the process of creating orbital rocketplanes. In order to encourage their development, an annual X-Cup has been announced. This ten-day festival in New Mexico promises to showcase the future of space tourism while dissolving the myth that space travel is an impossibility.

A few lucky (and filthy, filthy, filthy rich) men have already been able to experience space tourism. For the low price of 20 million dollars, Californian Dennis Tito was able to board the International Space Station via a Russian rocket on April 30, 2001. South African businessman Mark Shuttleworth visited the same location a year later.

Although most can’t hop on board just yet, there are plenty of places taking reservations. Rocket Plane plans their first flights for 2007. XCOR Aerospace is confident they will find a ‘middle ground’ for space tourists. Star Chaser is another developer interested in the market.

Studies by a leading group in Japan, NASA and even an American magazine have shown that private citizens are interested in space travel – and they’re willing to pay a lucrative amount to experience the thrill. Estimates show that with a ticket price of $50,000 USD, companies will still get half-a-million takers per year. Within two decades, the price is expected to drop to a much more affordable $10,000.

Right now, the biggest obstacles facing the industry are safety, regulation and developing a cost-effective, reliable, reusable rocketplane. There will be a number of deaths associated with this ‘taming of space’ and no one is thrilled at the possibility of being the test rat. However, investors and inventors think the price is worth it. Government regulations are already in the books – although only focusing on the protection of the non-flying public for now. The last challenge? The companies listed above are confident that someday in the near future, the concerns about reusable planes will go the way of $20 million price tags to get to space.