On Her Own in the Middle East 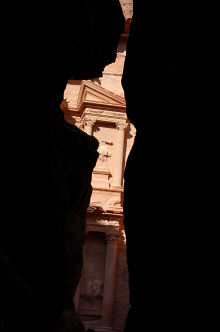 In this age of technological advancements, most Asian women still consider traveling alone taboo. This is exactly what I found out when I embarked on my solo trip to Petra, Jordan, a rose-red city carved on sandstones, once the bourgeoning trading capital of the Nabateans in the 6th century BC. My friends and colleagues in Dubai either thought I was plain crazy or out of my mind, others uncouthly raised their eyebrows. Jordanian women I met later on also shared the same mindset. One or two dared say I was brave and wished they possessed my so-called intrepidness.

I admit I was daunted for a while but my itchiness would not relinquish without a fight. For years I have wished for this trip and to vacillate just because I was traveling alone was not worth it, I thought. In the end my wanderlust nature prevailed and off I went flying one cold, early morning in October, 2005. It turned out to be the best trip of my life.

Advantages
Traveling on your own is not exactly pure bliss, neither it is pure misery. There is actually more to it than just danger and fear. For one, the freedom of doing things your way without hurting anyone else’s feelings or not having to bend to other people’s whims. One thing that irritates me about wandering in groups is laying out an exciting itinerary at the start and foregoing some of the scheduled visits in the end because some decided it’s not worth the effort. Or they’re just too exhausted to venture off.

Although I found and hooked up with exceptional trekking buddies in Petra, I regret missing the museum in that ancient city because one of my new-found friends suggested it was not worth the climb. He advised the museum had nothing much on display. He might have a point. Still I wish I visited all the same.

Second, there are no timelines, unnecessary pressures, no deadlines. You wake up whenever you want. You go when you feel like it. I got stuck in Amman for two hours after my 3½-hour flight from Dubai. It turned out the only bus I was depending on, JETT bus (private), had no trip that day to Petra, being a Friday…so much for my extensive research. For some time I lugged around with my suitcase in the melee of vendors, commuters in the city, grappled on my trifling Arabic with the locals asking for directions. Thankfully, a lean Jordanian guy came to my rescue. With his slightly broken English, he guided me in and out the ramshackle streets and brought me to the south bus station. 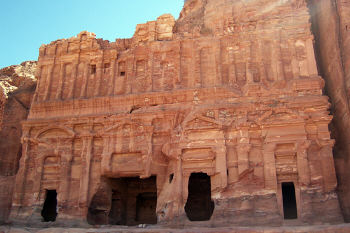 The station actually had a number of public minibuses plying the Amman-Wadi Musa (the town right outside Petra) route daily including Fridays. I then had to take another 3½-hour trip to the town, which was 180 miles south of Amman. But my exploits were not over yet. At the Wadi Musa I got dropped off at the wrong hotel, from which I had to catch another taxi ride. By the time I finally reached my hotel, Peace Way, the sun was already setting.

Imagine if I were with friends, a day’s wasted is what they would say. But was it? Looking back I see it as one exhilarating roller coaster ride. True, it was terrifying at times but I always treasure those moments in Amman – the interminable bus trips, the moments of uncertainties and excitements, the feeling of helplessness not knowing what to do or where to go. In the end I came out triumphant, finding the courage I never thought I had.

Expanding Your List of Friends/Overcoming Loneliness
If you’re the shy type, being on your own motivates if not forces you to gain new friends. Provided you have enough time, enrolling in summer classes or workshops, joining churches or interest groups in the city you are visiting are excellent boosters. The internet could also be a goldmine as long as you remain wary of gigolos and all. Don’t forget the most indispensable tool – talking. There’s no way you could strike up a conversation with strangers if you don’t speak up.

I’m not pretending I’m someone who talks freely to complete strangers but if the situation demands I do open up even if it means looking stupid. On my visit to Australia, I took a short photography course at one of the vocational schools in Adelaide. Feeling conspicuous as the only Asian in the crowd, at first I thought I’d get slighted but as I started chatting with fellow students, some of whom were also tourists, we were soon sharing our escapades enthusiastically, all inhibitions vanished.

In Jordan, I talked to drivers, hotel staff, fellow tourists, vendors, Bedouins, internet café owners, virtually anyone. Interacting is very important, it not only extends your friends list, it also keeps you sane battling with your aloneness and loneliness. Sometimes the people you talk to could turn out to be the best guides and companions. 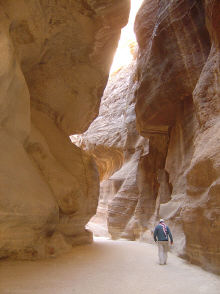 On my first night, I met one hotel manager in Wadi Musa who generously drove me around the town, giving me tips on what to do and where to go. As I walked around the As-Siq, the towering gorge leading to the fabled Khazneh or Treasury in Petra, I caught up with a couple from Poland who were also staying in my hotel. We decided to explore the site together. Before we reached the Street of Facades, we met another guy from Slovak Republic who also joined us. If not for them I would have never dared climb over the steep slopes, soaring ridges and lofty mountains and missed the sights and sounds of Petra altogether.

In Thailand while organizing an event, my computer supplier did not only provide us workstations but decidedly toured us around labyrinthine Bangkok, interpreting for us along the way. En route to Kuala Lumpur, three elderly Filipinos mistook me for a quintessential traveler and took me as their guide. I’ll never know if I gave them the wrong impression or if it was only due to their own frailty but it allayed my fears.

One precious lesson I learned while staying at budget hotels is that generally people who stay at these places are naturally down to earth, unassuming, devoid of idiosyncrasies. I met a number of backpackers who unabashedly wore the same set of clothes they were wearing the previous day, with yesterday’s dusts, smudges and all. Who cares about hygiene and decorum once you’re in the wild anyway? If you can, try to forget about air-conditioning or the usual comforts when traveling. At least, staying in budget hotels almost guarantees you won’t be exploring the sights alone.

I came by myself but by the time I left the ethereal city, I was with new friends of diverse nationalities. In Wadi Rum (a sweeping wilderness excellent for star gazing) I got acquainted with other bunch of tourists from varying countries. In Aqaba, I met some more locals and an Italian diver who showed me the best snorkeling spots on the Red Sea. By the time I left Jordan I made a whole new set of acquaintances I couldn’t have possibly made working in my office in months.

Disadvantages
But as I said earlier, traveling on your own is not always a bed of roses. Loneliness, as anyone would agree, is the worst enemy you will face. There were times I found myself forcing down my meal, deliberately ignoring thoughts of family and friends I left behind. I normally eat at conspicuous spots and frequent fast food chains instead of restaurants…well that’s mainly to cut costs.

One night while eating at a roadside restaurant in Aqaba, bushed by the stares of the commuters, I walked down to the beach with my sumptuous dinner – strawberry milk shake and shawarma (traditional fare of grilled chicken/mutton meat wrapped in Arabic bread, khobous). And there I had an enjoyable meal by the sea, staring at the flickering lights of Eilat, Israel while the glittering stars hovered. Be imaginative. It helps!

Lone women travelers are susceptible to men’s advances. I was forewarned but I was never prepared enough. In Jordan, I had to shoo off quite a number of Bedouins and deliberately ignore local men. While exploring the Old City in Israel, two Palestinian teenagers almost forced me into their car when I asked them the way; they thought I was their age most likely due to my petite stature. After escaping I met another Palestinian who held on to my arm until I jerked it and ran. From then on I learned to ignore the local guys if necessary, be firm when saying no and raise my voice if they insist. 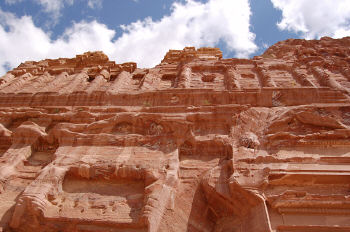 If you’re alone, there is no one to share an exciting moment with, no one to laugh with. Many times you’ll find yourself laughing or smiling by yourself. Further, if you love photography you’ll have to rely heavily on self timers. When I explored the ‘rampart’ (reconstructed hanging walkway) on the temple walls in Israel, I was the only person at the top so I had to pause several times and set the self timer. But later on I got used to it and forgot the nuances of self timing, absorbed in the amazing Jerusalem vista.

To travel alone or in groups is entirely up to you but to travel or not should be out of the question. Nothing and no one should stop you from following your dreams. There will always be risks, pros and cons but the enriching and enlightening experiences you will gain are invaluable. I do not profess to have traveled far and wide; in fact I have taken but a single step. I have yet more to conquer and see that’s why I will keep on traveling, be it to as isolated as Timbuktu or as crowded as China, alone probably or in the company of friends, strangers or fellow backpackers.

Should you decide to go, consider the following tried and tested tips.

Remember, “The world is a book, and those who do not travel read only a page.” – St. Augustine