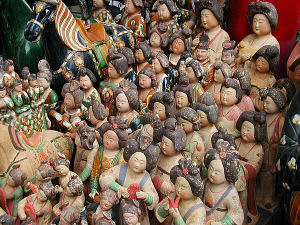 So you’re ready to travel. Pick a place, any place. Let’s say you’ve always wanted to go to China. You’ve seen pictures of the Great Wall, the Forbidden City, Tianenmen Square. You loved The Last Emperor and Raise the Red Lantern. You’ve eaten Szechuan and Hunan and Chao Chow. You’ve always been fascinated with Chinese culture, with red temples and Buddhas and ladies with tiny feet.

You happen to have some money socked away and extra vacation time accrued. There’s nothing to stop you – now’s the time to go!

But maybe you’re not someone who has traveled much. Sure, a summer in Europe, a Christmas in the Bahamas. You’ve been to Paris to visit friends, went to Mexico with an ex-lover, stayed with your sister in San Francisco.

But you’ve never really traveled. Not like this. You’ve never been to an exotic place, where you can’t speak the language, can’t even read the signs. A place where you’ll have to do all the research for yourself, find hotels, get yourself from airports to towns, buy train, bus or boat tickets, order your own food.

So now you’re ready for an adventure. You’ve got the money and the time to finally realize your dream. And you’re excited about it. You’re going to explore China, and find, for yourself, the soul of the country.

Your sister thinks China sounds awful. She doesn’t even like Chinese food. Your best friend just got a new job and can’t take time off. Your Significant Other – well, isn’t it a little too early to risk that relationship? Remember what happened in Mexico!

To travel alone, I suppose, is a difficult decision for anyone, though especially so for a woman. For me, it seemed to come naturally. I made that trip to China. And to Indonesia and Burma and England and France.

But the reactions I’ve gotten, from people I know, fellow travelers, and especially, from the natives of the countries I’ve visited, showed me that solo traveling is unusual, and even inconceivable to many people. People ask me if I’m lonely. People wonder what’s wrong with me. And because I’m a woman, I guess, (and small?) people have felt the need to take care of me.

This has been sometimes a blessing, sometimes a curse. I remember searching desperately for accommodations in Tainan, Taiwan. I went to a University that was listed in my guidebook. I was rather distraught when they told me they no longer had dormitories for travelers. Then, the desk clerk called a young woman out of a nearby office. She said, “Do you like this girl?” I wasn’t quite sure what she was getting at. As it turned out, the young woman was offering to let me stay at her flat. She didn’t speak a word of English, and I didn’t speak Mandarin. She had to work the next day, so arranged for a friend to come over and chauffeur me around on her motorbike.

Also in Taiwan, I met two girls on holiday who smuggled me into their hotel room, gave me one of the beds (they shared the other), and took me to dinner with their tour group. At dinner I was told that the Taiwanese never go “Dutch” – members of the group take turns picking up the tab. (“When will my turn come?” I asked, much to their amusement). When they heard my next stop was their hometown, they arranged for a friend to pick me up at the train station and give me a tour of their city.

In Thailand, I met two women on a boat who took me home, let me stay with them for a week, and played hooky from work to take me sightseeing. In Burma, a man invited me into his house so that he could practice his English; I ended up speaking to his father in Japanese. In France on Bastille Day, an Adonis rescued me from a bus stop when no buses were running, and he carried my backpack across town where we hitchhiked to Avignon.

But there have been the not-so-pleasant experiences. On the island of Lombok, in Indonesia, a cute boy gave me a ride on his motorbike, and thought that gave him license to grope. All over Indonesia, boys pestered me, assuming I was willing to pay for their company.

In Japan, I was picked up hitchhiking by a young man who refused to drop me at the Youth Hostel as I requested – he insisted I stay with his friends. The friends turned out to be four girls – I was safe, but one snored like a lawnmower, and it took me two days to escape.

I’ve been frustrated many times – not speaking a language, not understanding and not being understood. What about the time in Italy when the hotel clerk tried to overcharge? (After 10 minutes of incomprehensible arguing, she gave up). The time in China when a taxi driver insisted I pay more? (I was rescued by the doorman of a fancy hotel – even though I wasn’t staying there, but in the hostel next door). The time in Indonesia when I was served a plate of rice with a chicken foot? (I went up to the counter, the foot was promptly removed from my plate, and I enjoyed the meal.)

Having a companion might have helped me avoid some of those problems. But I wouldn’t have had the other opportunities – the seven days through Burma in the back of a truck with a Brit, two Aussies and two Norwegians. Eating my way through Eastern Korea with four youthful Japanese salarymen. Traveling from Malacca to Penang, Malaysia, and sharing cheap hotel rooms with a sweet Englishman. Hanging with a Japanese girl in Hong Kong, who set me up with a place to stay with her friend in Singapore. Getting sick in China, and being nursed with Royal Jelly chocolate bars by a couple from Texas.

I have often traveled alone, but I have not often been alone while traveling. The few times I have traveled with a companion, I found that it was more difficult to meet people. Other travelers can give you not only information on the places they’ve been, but also new insights into the place you’re visiting. And the locals see you as more approachable when you’re on your own.

Traveling alone, you can often avoid a “single supplement” by simply teaming up with another solo traveler. I have many times shared rooms with new friends of both sexes. This may strike some as foolish and dangerous, and perhaps I have been lucky. I depended on my instincts. I have had a few harrowing experiences when staying alone, but have usually felt that I could trust a fellow traveler.

Of course you have to be careful. Watch your back, but don’t be paranoid. Be friendly with people but watch out for those who are too friendly with you. Trust your instincts. Talk to people. If you hear stories about bandits on a road in Thailand, take the road – just don’t take much cash, and don’t accept Coca Cola from strangers.

The key to solo travel is to open your mind, close your eyes and leap in! Everything that happens to you is an experience. That experience will benefit you in some way. At the very least, it will be a funny story to tell the folks back home. Take those little annoyances, those inefficiencies, those plodding bureaucrats with a laugh. If something makes you angry, just remember: you don’t live there, you can leave anytime, and you’ll never have to deal with this again!

Don’t ever let a lack of companionship keep you from doing what you really want to do. Once you go solo, you’ll be amazed at how much richer your travel experiences will be. You may find that they have changed you, almost certainly, for the better.