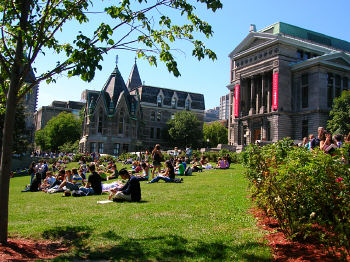 Remember all those quirky kids back at your home university? You know the ones. They talk different. They walk different. They look different. They’re – dare you say it – international. On most days you pass them by not thinking much of them. They’ve got their life to live. You’ve got yours. At the end of the day, your lives are headed down separate paths. They have nothing to do with you.

It’s ok. You can admit it. There’s really no point in denying it. I even thought that at one point. The key word there is thought – in the past tense. Now the tables are turned and I’m the one who’s walking funny, talking funny, looking funny. I’m the international. And now I know how desperately I want to stop being branded and overlooked. Now I know how much I want my silly accent to just disappear and fall in line with the folks who say “No worries,” and “Cheers mate.”

While studying abroad and being the international student definitely has its upsides, it has its downsides too that sometimes students don’t think of before making the trip. So here’s a few tips from one international to another on how to cope with these moments of difficulty.

No Place is Perfect
The first thing you’ve got to realize is that you are international and this country, just like yours, isn’t all roses. While it may initially seem like you’ve parachuted straight into paradise, 99% of exchange students will run into those moments of rain. Life isn’t perfect. The more you realize this, the more prepared you’ll be when you learn that every male in Australia doesn’t have a surfer body or every boy in France isn’t an utter romantic. Things won’t be what you expect and chances are that will end up being both good and bad.

You’re Not “Necessary”
The next thing you have to realize – and this one can be a toughie – is that nobody in your new country needs you. Yeah, yeah, that probably sounds harsh, but it’s true. Chances are if you’re studying abroad you’re heading over during your sophomore, junior, or senior year of college. This means, there’s not going to be heaps of new students who don’t know each other. They’ve been there, done that. By the time you get to your international uni, most of the people in your classes will have established friends, established lives and neither of these will include you. On the introduction orientation you attend, most of the people you meet will be other internationals who are floating in the same boat you are, raising high a flag that says “I’m alone and foreign.”

Making Friends May Mean Making the First Move
But don’t let this deter you. Yes, it’s important to realize the facts. Domestic students don’t need you like you need them. They already have friends. You don’t. But this doesn’t mean that they’ll bite if you come close or they’ve already capped off at the number of buddies they’re allotted per semester. Chances are most people would love to be your friend. The thing is, you’re going to have to do most of the initial work. Say hello, be approachable, compliment their shirt. If none of that works, buy them candy. Everyone loves chocolate.

Ok, so maybe buying friends isn’t the way you want to meet your bestest new buddy. Can’t blame you for that. The good thing is there are plenty of other ways to meet some new folks. You’ve just got to put yourself out there and seeing as though you’ve already moved to a foreign country by yourself, the hardest trial is already over. The best way I’ve found to meet people is the most obvious: get involved. Most of the time, unless you have group projects, classes aren’t the best arenas to meet people. That’s why you need to get involved elsewhere. Join school clubs. Play intramurals. If you’re religious, join a local church. Get involved in a volunteer project. Work. (I know, I know, you didn’t come here to slave over a hot stove, but working is a great way to meet people and get some extra dough on the side!) No matter what you do, put yourself out there. Take one step out of the comfort zone and introduce yourself when you typically wouldn’t. You don’t always have to be riding in the ship of the alone and foreign.

Find the Other Internationals
That being said, you don’t have to limit yourself to simply hanging out with the locals. Too often, people get it in their head that since they’ve moved to Australia they have to hang out with Australians. Yes, that would be great. Australians are fantastic. But that doesn’t mean all the other international students floating about aren’t worth your time. Just because they’re not a native of the country doesn’t make them less cool or less worthwhile. In truth, they’re probably easier to meet and more anxious to hang out. So don’t be too quick to cut anyone off just because they don’t have the accent you desire. You came here to meet people. At the end of the day, who cares where they’re from?

Things Are Different Here: Respect That
The final thing you have to realize – and one of the most important – is that this is their culture, not yours. This means that you’re probably going to have to make some compromises and adjustments. Maybe you’re a heavy chain smoker and your new country doesn’t allow smoking inside public facilities. Don’t throw a hissy fit. Don’t knock the culture just because it’s not what you’re used to and you think the rule is stupid. You’re the one who moved, not them. If you want to cause a scene, do it in the privacy of your own home. Leave the public spectacles for other times… Like your drunken evenings.