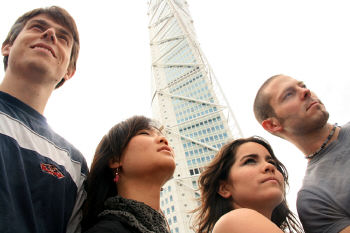 Some locations are just considered hotter on the study abroad thermometer than others. What are the top reasons one area might snag more students than others? Program credibility, safety, learning opportunities, language offerings and – perhaps above all – the overall coolness factor of the country itself.

The following is a list of the top 10 study abroad destinations for U.S. students, and it’s based on statistics from 2005. While the top spots on this list may not surprise you, you may not have expected some of the entries further down the list. We sure didn’t!

The U.K. has long been the top study abroad destination, and it doesn’t take a genius to figure out why – for English-speaking students going abroad, it’s one of the places where you don’t have to be studying a foreign language to get by. Learning a language is hard, right? So if you can get away with doing less work and still studying overseas, all the better! The U.K. is one of the most popular destinations for first-time vacationers, so it’s not surprising that it would also be popular with students.

In all seriousness, the United Kingdom offers some of the top study abroad opportunities, whether you’re talking about the bustling capital of London, Scotland’s historic capital city of Edinburgh, or any number of smaller cities and towns throughout England, Scotland, Wales or Northern Ireland. And if you’re studying theatre, literature, or history, the U.K. is a great place to be. Oh, and about the language thing – don’t assume your English will be like their English. There are differences, albeit sometimes subtle ones, that can make for some pretty entertaining exchanges.

Again, with Italy coming in near the top of the list for vacationers, it’s not a surprise to find it near the top of the list for students. You can easily choose to study in some of the country’s most famous cities – amazing places like Rome or Florence – but don’t limit yourself to the cities you’ve already heard of. For instance, did you know that Europe’s oldest university is in Italy? It is – but it’s not in one of the big tourist centers. Instead, it’s in Bologna. And while Pisa may be most well-known for it’s leaning tower, the city is also home to a popular university. Other Italian cities worth looking into for their study abroad programs are Verona and Milan.

One of the perks of studying in Italy is that you’re literally surrounded by history almost everywhere you go – and some of that has to seep into your brain at some point. Anyone studying Italian, fashion, history, or religion could do worse than studying in Italy.

Since so many college students are taking Spanish as their foreign language, it makes sense that Spain should rank so highly on a list of places to study overseas. In addition to the language-learning and other schooling reasons for spending a term or a year in Spain, there are the more travel-oriented reasons – Spain is, after all, a backpacker’s delight. The cities of Barcelona and Madrid are veritable magnets for young people, and the fact that the parties last all night is only one thing drawing them. The combination of European culture and a Mediterranean climate are just too good to pass up.

Besides Barcelona and Madrid, other popular cities to study in are Granada and Seville, but there are plenty of location around Spain which are worth looking into for your study abroad experience. Art and architecture students in particular appreciate what Spain has to offer.

France is probably the most-visited country on earth, and it receives an enormous number of study abroad participants each year. Many of those students probably head directly for Paris and don’t look back – and who can blame them? The City of Lights is romantic and magical, even on a student’s budget, but there are lots of other French cities which are great for studying in. In fact, if you get beyond Paris you’re more likely to get beyond the stereotypes.

The French don’t have the best reputation when it comes to tolerating foreigners mangling their language; but that reputation is largely an exaggeration, and isn’t that why you’re studying in France to begin with? To perfect your French language skills? Students of art, cuisine, fashion, and history are well-suited to enjoy their time studying in France.

Going back to the concept of studying in a place that doesn’t require English speakers to get too far outside their language comfort zone, we have another English-speaking country on the list – Australia. And again, as with the United Kingdom, although Australian English really does have its own individual language qualities, it’s certainly easier to not have to worry about an entirely different language altogether.

Sydney and Melbourne are two of the more popular cities in which to study in Australia, but Australia’s a big country. Even though the huge central region isn’t anyplace you’re going to find a university, the western city of Perth is another option if you want to get beyond where most students go. If you’re studying marine biology, you can’t do much better than to be near the Great Barrier Reef, but students of just about any subject can find lots to enjoy in Australia.

Maybe you’re studying Spanish but you’re not really interested in following the student hordes to Barcelona. Whatever your reason, students of Spanish in North America definitely shouldn’t overlook the big Spanish-speaking country just south of the U.S. border. It’s a different kind of Spanish language you’ll be learning, but Mexico is a country with a rich culture and distinct history that makes it an excellent place to study abroad.

Aside from the obvious language-learning perks and the cultural immersion that you can get in Mexico, we can’t blame you if you’re also thinking that studying in Mexico makes you that much closer to some of the best Spring Break destinations on earth. Yeah, we know that’s what you’re thinking. Just make sure you get some schoolwork done, okay?

Students of German only have a few options when it comes to studying abroad, but that’s not why you should consider studying in Germany. It’s a fascinating country with an interesting history that leads right up into the recent memory of people you know. And because Germany has undergone so many changes in recent decades, it’s even more interesting to witness the continual changes the country is dealing with.

Berlin is one of the more popular cities in which to study in Germany, and it’s also the city that’s going through the most change – it seems to be in a perpetual state of reconstruction and revitalization these days. Munich is another popular destination, partly for its unique Bavarian culture and partly because you can’t do better than study in the city that hosts Oktoberfest every year.

Yes, there’s yet another country on this list where English is the native language. Or is there? Sure, everyone in Ireland speaks English – making this a great place to study abroad if learning another language isn’t on your to-do list – but many people also speak the Irish language, so they can still talk about you without you knowing what they’re saying. Which is good for them, perhaps less good for you. Still, it might make it a more authentic study abroad experience, right?

Ireland is notorious for being a land of impossibly green landscapes, great beers, fantastically bad weather, and some of the warmest people you could hope to meet. It’s especially popular with people of Irish descent, as the Irish particularly love to meet long lost family members, but students of all kinds can excel in Ireland – just as long as you don’t require sun and sand to survive, that is.

China has been on the rise as a popular place to study abroad for many years now, probably mostly due to the country’s overall rise on the world stage as an economic power. Learning one of the Chinese languages, while incredibly challenging, is one big step on the road to international business success in the modern world – and there’s no better way to get a leg up on the language thing than going straight to the source in China.

But that international business success isn’t just about knowing the language, it’s also about knowing the intricacies of the culture, and studying in China will give you insights that others just won’t have. So in addition to the incredible experiences you’ll have as a student in China, you can also benefit greatly from your new cultural perspective later in life.

In addition to Spain and Mexico, Costa Rica ranks highly on the list of potential study abroad destinations for students of Spanish. The country is famous for its lack of a standing army, its general acceptance of foreigners (it’s a popular place for expats to retire), and its plethora of ecotourism opportunities. Oh, and if you’re cultivating a burgeoning addiction to coffee, you can’t go wrong in Costa Rica.

From a traveler’s perspective, Costa Rica has the added benefit of being in a cheaper part of the world to visit than the more popular study abroad locations in Europe. And from a student’s perspective, if you’re studying anything related to nature you may think you’ve died and gone to heaven by studying in Costa Rica. Unless, of course, there are no final exams in your version of heaven.