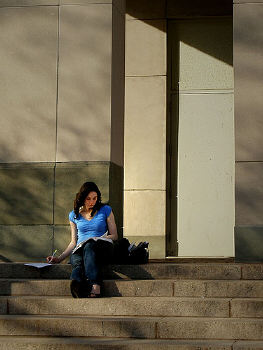 I’m rushing down the corridor of the Madrid Barajas Airport. All of the Spanish phrases and words I know are bouncing around in my head like popcorn. My arm is burning and I can hardly feel my fingers from the weight of my rolling duffel bag. Who made these things anyway? I thought they were supposed to make traveling easier. My backpack towers above my head, making it difficult to lean over and drag my duffel bag without falling over. The sweat is pouring off my forehead and my stomach is churning from that mystery meat they gave me on the plane and the cigarette smoke that fills the air. I haven’t slept in what seems like an eternity. I’m scared out of my mind. I’ve wanted to travel abroad since I can remember and for the first time I’m second-guessing the decision. But it’s too late. There is no turning back. But I’ve been in Spain less than an hour, and I already want to go home.

Madrid isn’t even my final destination. I’m headed to Oviedo. Oviedo is a small and pleasant town in northern Spain, but I don’t know that yet. At this point, Oviedo seems as far away as the depths of hell. Still, I have to figure out how to get there… alone. I’ve already ruled out taking the bus or a train. This would require taking the metro, which I don’t even want to begin to have to deal with. Also, another six or seven hours of travel on a bus sounds about as appealing as stabbing one of those plastic airline forks in my eye. So, I decide to fly, no matter what the cost. This is something I’ll regret later, when my funds start running thin.

When I finally find the Iberia Airlines ticket counter, I look like someone has soaked me with a garden hose. I stand there for a moment, gathering my belongings and my thoughts, repeatedly practicing what I will say to the ticket agent once I approach the counter: “Quiero un billete para Oviedo… quiero un billete para Oviedo.” The words sound so clear in my head, but when I approach the glass, I have to repeat the phrase three times before the woman in the blue blazer understands what I need. When she speaks back to me, all I hear are muffled sounds through the glass that separates us. She tells me how much my ticket will cost and I lean in close, asking her to repeat. After about the fourth time, she scribbles the number down on a scrap of paper and shoves it against the window. I feel stupid taking the time now to convert the amount of pesetas into dollars, so I just nod and hand her my credit card. I’m zero for one.

Making the Decision to Study Abroad 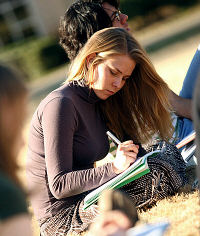 When I was planning to study abroad, the difficulties and stresses never really crossed my mind. Promotional signs and pamphlets all over my home university, the University of Oregon, told me that abroad was a “most interesting place to learn.” Interesting, mind you, not stressful. Then why was my stomach in knots and my palms sweaty and trembling? Maybe this was just excitement? Pure adrenaline? If I looked at it that way, I could keep myself from having an anxiety attack.

Studying abroad had always been part of my university plan. Both of my older sisters had done it and I didn’t see how my college experience could be complete without delving into another culture. So, I decided on Spain, a place where I could perfect my Spanish, complete some Spanish credits and travel throughout Europe. Because I wanted to learn Spanish, it was never an option for me to study abroad for less than a year. I’d heard that after just a few months I’d just be getting the hang of the language and culture, so the longer I stayed there, the better.

After deciding on Spain, the next challenge was to find a place within the country where I would want to spend that year. My university offered programs to Sevilla, Barcelona and Madrid, but I was afraid these cities would be too big and touristy. My biggest fear was arriving and being surrounded by flag-waving Americans. That was when I discovered the Oviedo program. It was advertised as a small town with little tourism, set in the rolling hills of northern Spain. That was all I needed to hear before I picked up the application and signed myself up. Before I knew it, I was packing my bags and getting on a plane. Until that point, I had just been going through the motions, making plans to go without actually thinking of that day when I would step off the plane into unfamiliar territory. They had made it sound so easy. Why, then, did I feel so petrified?

Settling In to Student Life in Spain 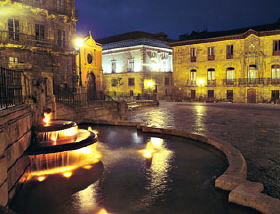 Once I finally arrived in Oviedo, I couldn’t believe that I was there. I was literally pinching myself. I expected someone at any moment to tell me that it was all a practical joke, that really I was still in Oregon. Then, I met my host mother and it all started to sink in. She spoke like rapid fire, and I quickly realized how much I was going to have to work on my Spanish. I could understand most of what she rambled, but felt dumbstruck every time she expected a response. I tripped over my words and fought off embarrassment with every syllable. It was going to be a long year.

Before going to Spain, I expected to adjust quickly and immerse myself into the culture with minimal problems. I soon found out, however, that it was going to be a lot more difficult than I had originally thought. Buying a newspaper, ordering coffee, introducing myself to my host mother’s friends – everything was a small victory in and of itself.

Walking down the street was no longer simply walking down the street; I made a new discovery at every turn and met a new challenge with every step. I wanted to take advantage of every spare moment that I had, but still maintain some feeling of relaxation and comfort. My head was spinning with the amount of trips and activities, bars and people I had within reach. Is this what they meant by culture shock?

Before long, the nervousness dissipated and I found myself looking forward to each new experience with a sense of adventure and excitement. With each passing day I thought less and less about the friends I had left back home and more about friends I could be making. I learned to find satisfaction in the little things. I could order for myself at a bar, I had made a few Spanish friends, I didn’t hesitate to ask someone for directions and I’d figured out how to use the coffee maker at my host mother’s house. To me, these were all major accomplishments. I’d been tossed completely out of my element and had finally found my little niche on the other side of the Atlantic.

Time flew. By the time spring break came, I had already begun to think about leaving in June. My plane was set to leave on June 13, and I panicked to think that I’d soon be on a plane back home. My initial paranoia and nervousness had turned into complete comfort. Spain was my new home; there was no way I could leave just yet.

Frantic, I changed my plane ticket so that I could stay another three months. 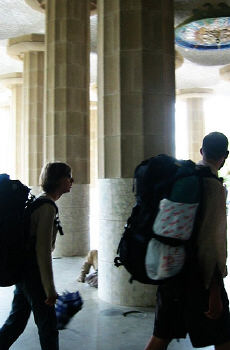 I spent the summer exploring more of the country I had grown to love, traveling, wandering through the countryside and feeling a certain sense of urgency as I realized how little time I had left.

The day before my plane left for the States, I caught an overnight bus to Madrid. This time, my heart sank instead of beating furiously as it had done on my trip to Spain almost a year before. Fear is nonexistent. By this time, I have taken buses all over the country, north to south, and east to west.

I kick myself for having flown to Oviedo from Madrid when I first arrived to Spain. If I had just taken the bus, I might have more than five euros in my pocket to make the trip back. But there’s nothing I can do about it now.

When I get to the bus station in Madrid, I heave my overflowing backpack on my tired back and drag my rolling duffel bag behind me. Both of my bags are a lot heavier than I remember them being on the trip out. I struggle to the metro station and shuffle onto the number six line. I have to switch trains once more before arriving at the airport. I have no questions about where to go or what to do, but if I did, I would know how to ask them. Unlike on the day of my arrival, I know exactly where I am going, even though I am heading there unwillingly.

When I arrive in Newark, giant-sized American flags and the harsh New Jersey accent greet me in the airport terminal. People are rushing all around me, complaining about lines and tickets and pushing me aside. I’m back in the United States and it feels like a foreign land. I’m almost surprised when I hear a woman behind me say, “Excuse me,” as she nudges by.

As I wait for my plane to Denver to take off, I order coffee and an old-fashioned American brownie at a coffee shop called Jake’s Coffeehouse. The woman behind the counter catches me off-guard when she asks if I want whipped cream on top of my mocha. Why not? I am in the land of excess. I’m looking forward to indulging in these sweet treats, but when I sit down to enjoy them, the brownie is dry and the coffee tastes watered down. The whipped cream is the highlight of my first American indulgence in a year. I feel a pang of homesickness… for Spain. What I wouldn’t do right now for a café con leche and a chocolate palmera. I have been in the States less than an hour, and I already want to go back home.

>> Check out other articles in the Study Abroad Guide for more information and tips about studying abroad.